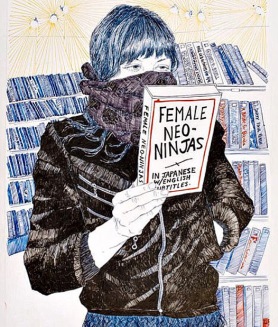 I didn’t write this morning, Flanders. The jellyfish flooded the shallows and I swam hard for shore. They stung and red welts flowered on my skin like freshly inked tattoos.

I wrote a short story once about a little girl lost in a cave, where the dead were buried in coffins tied or nailed to the side of cliffs. I’m sorry I lost the story.

Re: Joy Williams: she finds the “mysterious and magical heart within even the most ordinary human acts… She doesn’t describe life; she exposes it.”

Have you read Joy William’s Dimmer? Here’s the mysterious and fucking magical heart they’re going on about:

Exhibit A: “He had folded up the story and put it in the pocket of his jeans for one year and one half straight because they were the only pants he had and the paper had turned from print into lint and then into the pocket itself.”

Exhibit B: “He still had the jeans–spread out flat on the bottom of his suitcase but they were just a rag really, not even a rag but just a few threads insufficient even to cover up a cat hit in the street.”

Exhibit C: “…the heels of his boots making broad coffin holes in the sand…”

Exhibit D: “In the morning he was not there. Only his mouth was on the taste of the fork stabbed into a pan of fatty mutton.”

I went to the bookstore, searching for a biography of Virginia Woolf. I thought it might soothe.

from: Gordon Flanders <gordonflanders@email.com>
to: Babe <listentothebabe@email.com>
date: Wed, Dec 2, 2015 at 12:51 PM
subject: what in christ

I’ve been reading Thoreau again so you know what that means. I’ve been sleeping more and working at the restaurant more. I finally learned that the two must coincide. I used to try to push past the sleepiness and just write.

I also started reading Gravity’s Rainbow by Thomas Pynchon and I hardly understand any of it. I have to look up about twenty percent of the words. Hemingway said it was hard enough writing stories without having to explain them, and that a writer shouldn’t have to guide another writer through the more difficult terrain of their work. I better figure something out about writing.

I wrote a story for my sister. I borrowed this book called Vivid and Continuous by John McNally. I’m trying to push down my pride and do writing exercises. One of the exercises is to write a story for someone you wouldn’t normally write for, and so I wrote a childish story about a girl who wants a horse but gets a rabbit, and how the rabbit outlives the girl’s fancy, and then dies, sadly looking at my sister and wishing it was enough. It is a terribly sad and childish story. I wrote it by hand.

I want to cry now.